Microbial contamination in water and its significance

Water is susceptible to contamination with microorganisms and organic matter among other pollutants regardless of the source. The most common health risk associated with drinking water is microbial contamination from disease-causing micro-organisms, such as bacteria, viruses and protozoa. Clean water is not only essential for  drinking only rater it is also critical for many evaporative or closed-loop cooling water systems, pharmaceutical, food and other process industry.

Objectionable taste, odour and colour can result from compounds produced by certain types of algae, bacteria and sometimes protozoa. Iron and sulfur bacteria contribute to the corrosion of iron and steel well pipes, drinking-water mains and other problems in groundwater sources. Manganese-oxidising organisms (bacteria, fungi) may be responsible for deposits in aquifers, wells and water conduits. The presence of these organisms may also indicate organic pollution of the aquifer. Further, the water treatment systems, storage and distribution system are also susceptible to the establishment of adhesive biofilms or microorganisms  which can be the source of undesirable levels of viable microorganisms or endotoxins in water and contribute to an increase in particles, bacteria, and the level of total organic carbon (TOC).

Various water disinfection technologies are available to control microbiological grown in the water and distribution system. Their  selection is based on water source, level of contamination, treatment and storage facilities, its final application or use.

UV Sterilizer is relatively easiest, most affordable and arguably the most effective way to protect their water supply from microorganisms. A UV system is a metal chamber that houses a UV lamp. UV radiation destroy most of the water born microorganisms in a non-chemical manner. The powerful UV radiation penetrates the outer cell wall of the microorganism, passes through the cell body, reaches the DNA (deoxyribonucleic acid) and alters the genetic material. Our Select UV systems feature low pressure mercury discharge lamps. These lamps are place in special transparent quartz glass tubes which transmit the UV energy to the water flowing through special chamber without allowing direct contact of water with the UV lamp. This exclusive design allows predominantly 254 nm or 185 nm UV energy to be transmitted into a water stream as it flows through the UV system’s treatment chamber. This capability allows widespread adoption of UV light as an environmentally friendly, chemical-free, and highly effective way to disinfect and safeguard water against harmful microorganisms. 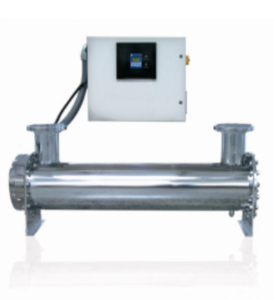 Ultrafiltration (UF) is a separation process using membranes with pore sizes in the range of 0.1 to 0.001 micron.  Typically, ultrafiltration will remove high molecular-weight substances, colloidal materials, microbes, bacteria and viruses, and organic and inorganic polymeric molecules. Low molecular-weight organics and ions such as sodium, calcium, magnesium chloride, and sulfate are not removed.  Because only high-molecular weight species are removed, the osmotic pressure differential across the membrane surface is negligible. Now a day’s ultrafiltration systems are mainly used with all mineral water plant to reduce to microbial contamination. 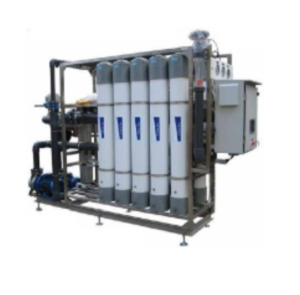 Ozonation (is a chemical water treatment technique based on the infusion of ozone into water. Ozone is a gas composed of three oxygen atoms (O3), which is one of the most powerful oxidants. Ozonation is a type of advanced oxidation process, involving the production of very reactive oxygen species able to attack a wide range of organic compounds and all microorganisms. The treatment of water with ozone has a wide range of applications, as it is efficient for disinfection as well as for the degradation of organic and inorganic pollutants. Ozone is produced with the use of energy by subjecting oxygen (O2) to high electric voltage or to UV radiation. The required amounts of ozone can be produced at the point of use but the production requires a lot of energy and is therefore costly. 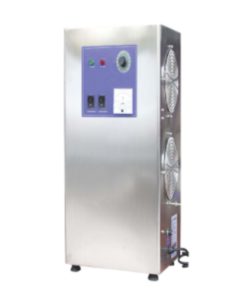 Various chemicals usually termed as biocides are successfully being used in water treatment applications for many years to control microbial growth and reduce fouling on critical surfaces. These include oxidizing biocide such as chlorine, bromine, ozone, chlorine dioxide, and peracetic acid which simply oxidise microbial cells and kill most micro-organisms including bacteria, algae, fungi, and yeasts. The non-oxidizing biocides, including CMI/ MI, glutaraldehyde, DBNPA, bronopol quats, and dithiocarbamates (1-4) kill microorganisms typically by disrupting the organism’s metabolism or damaging the cell wall. The overall efficacy of any given biocide is a function of its general spectrum of activity, mechanism of action, stability under environmental conditions, and compatibility with systems components and additives. 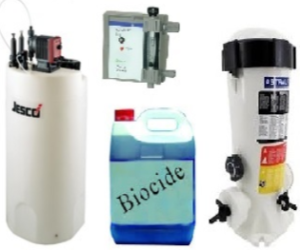