Dissolved gases in water and their significance

All natural waters, to a greater or lesser extent, remain in contact with air and absorb various level of gases from the atmosphere. Major gases found in wells are methane, oxygen, carbon dioxide, nitrogen and hydrogen sulfide (H2S). Dissolved gases in well water occur commonly and the ability of water to hold these gases varies with temperature and pressure. Except H2S (which indicated rotten-egg odor), all gases are odorless and difficult to trace. H2S occurs mainly in groundwater supplies, and may be caused by the action of iron or sulphur reducing bacteria in the well. Severe gas problems may cause the gas locking of submersible and jet pumps. Oxygen (O2) and carbon dioxide (CO2) gases cause specific types of damage to metallic boiler materials and other mechanical systems and cause corrosion which considerably endanger the operating safety of a boiler system: Oxygen has an oxidising effect, and carbon dioxide (carbonic acid) is aggressive. O2 on the other hand is detrimental to aquatic life which utilize this oxygen for their life.  On the other hand, chlorine is also dosed to municipal water supply system to keep water distribution safe from microbial growth, however, it also leave a pungent smell and requires complete removal for various applications as RO, ion exchange etc. Depending upon  the application, various technologies and systems are used to reduce the load of these dissolved gases.

Aeration brings water and air in close contact in order to remove dissolved gases (such as carbon dioxide) and oxidizes dissolved metals such as iron, hydrogen sulfide, and volatile organic chemicals (VOCs). Aeration is often the first major process at the treatment plant.  The scrubbing process using natural air caused by the turbulence of aeration physically removes dissolved gases from solution and allows them to escape into the surrounding air. Once oxidized, these chemicals fall out of solution and become particles in the water and can be removed by filtration or flotation. 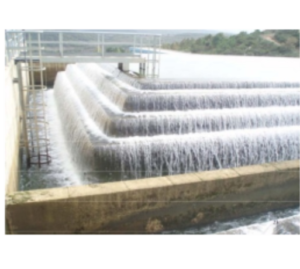 Deaerators are mechanical devices that remove dissolved gases from water. boiler feedwater. Deaeration protects the steam system from the effects of corrosive gases. It accomplishes this by reducing the concentration of dissolved oxygen and carbon dioxide to a level where corrosion is minimized.  For this purpose, we provide Horizontal Deaerator tanks, Vertical Deaerator towers and Spray cum Tray type Deaerators. The water is fed in through a distributor at the top of the column. The column is filled with structured packing which achieves an immense enlargement of the available surface. A strip gas (CO2, N2) is introduced at the foot of the column. It absorbs the oxygen from the water in the counterflow.  As a result, Water deaeration to the lowest possible residual oxygen values is achieved. 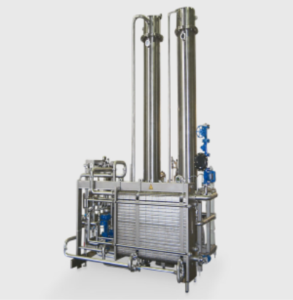 Thermal degassing of boiler or industrial process feedwater (at around 100ºC) to separate out the dissolved and corrosive gases contained within requires water be near boiling. Fine distribution via cascading percolation plates has a supportive function. At this temperature, the solubility of gases in liquids lies near zero and an oxygen content of < 0.02 mg O2/l and a carbon dioxide content of < 1 mg CO2/l are possible in the feedwater. With vacuum degassing (operating pressures of around 0.2 to 0.3 bar), water can also be degassed below 100 °C by boiling. Here degassing takes place in a percolator with a spraying unit, packing and supply section. The gases are removed via a vacuum pump. 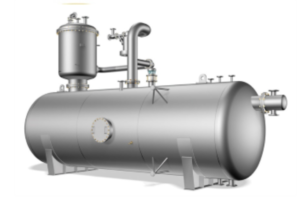 Membrane Contactors are membrane based devices used to carry out gas-liquid mass transfer. Membrane contactors are constructed using micro porous hydrophobic membranes. The membrane is used to bring a gas and liquid in direct contact without mixing. Contractors operate by lowering the pressure of gas in contact with the liquid to create a driving force to remove the dissolved gases from the water. Contactors are used extensively for deaeration of liquids in the microelectronics, pharmaceutical, power, food & beverage, industrial, photographic, ink and analytical markets. 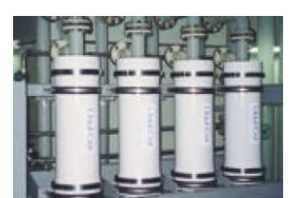 Oxygen Scavengers are chemicals that react with water and reduce dissolved oxygen level in water (Usually boiler feed water). Few of the commonly used oxygen scavengers are sodium sulphite, tannis, hydrazine, hydroquinone/progallol-based derivatives, hydroxylamine derivatives, hydroxylamine derivatives, ascorbic acid derivatives, etc. These scavengers, catalyzed or not, reduce the oxides and dissolved oxygen. Most of these also passivate metal surfaces. The amount of Oxygen scavenger to be added to the water is controlled by special dosing pumps. 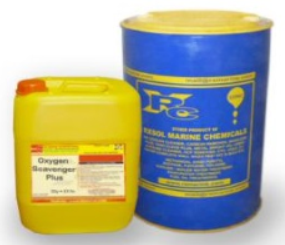